On the 9th of January  Rotary Club Estoi Palace International (RCEPI)  was delighted to welcome our District Governor Afonso Malho from RC Bombarral  on his official visit.

Following a meeting with the Club Board the DG was welcomed by 40 members,  visiting Rotarians and guests.  After an excellent lunch in the Grand Salon at Estoi Pousada  our President Manuela Robinson presented the DG with a donation from the Club which he will give to the Portuguese Rotary Foundation to support youth projects. 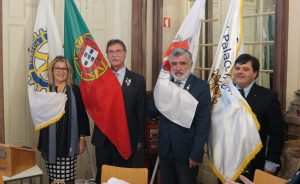 The Governor spoke about the need for Rotary Clubs to work together to achieve as much as possible nationally and internationally.  President Manuela Robinson gave the DG a personal gift and he presented her with a small piece of artwork comprising 5 figures representing the continents and working together plus this year’s Rotary theme logo and motto  ROTARY MAKING A DIFFERENCE.

After lunch, the DG accompanied by President Manuela,  President Elect Bruno Costa and Head of Community Service Christine Fay visited the Estoi Casa do Povo and met with Odete da Sousa who oversees the monthly food pack distribution from the Faro Food Bank and organizes community events. The DG was shown around the Casa do Povo Community Centre and saw  how we contribute with the milk project, supplying nearly 50000 litres of milk over the last 8 years to supplement the Food Bank parcels. DG Malho was shown the brand new van that the Club helped them purchase just before Christmas and photos from the Christmas party that RCEPI organized for the underprivileged in the community.

After this visit the group moved on to the Fire Station in São Bras to meet their newly elected President Custódia Reis, Comandante Vítor Martins and 2nd Comandante Salvador Gonçalves and see the premises and meet the staff.   RCEPI  have helped the Bombeiros over the years and during that time have purchased a compressor for them,  new hard hats and boots,  two defibrillators and most importantly a fully equipped Ambulance.

Our District Governor was impressed with the work that Rotary Club Estoi Palace International does in the Community and the enthusiasm and commitment of its members.

English
Get Involved
We use cookies to ensure that we give you the best experience on our website. If you continue to use this site we will assume that you are happy with it.Accept