Estoi Palace International Rotary Club (RCEPI) was delighted to receive a visit from Ilda Braz of RC Ponta Delgada, Açores our Rotary International District Governor (DG). This is an opportunity for the Club to show the DG work that has been done in the local community and internationally. During the visit the DG gave the Club a Certificate of Merit for the funds donated to the End Polio Now campaign, following a successful sponsored bike ride last November. 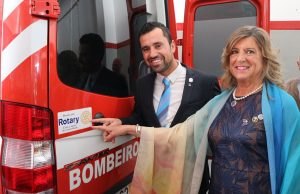 President Bruno Sousa Costa, Past President Manuela Robinson and Chair of RCEPI Service Committee Maria Jose Pires met DG Ilda Braz and her husband José Braz at the Sao Bras Bombeiros where they were greeted by the Bombeiros President Custódia Reis and Sub Commandant Salvador. The group were given a guided tour of the fire station and the District Governor was shown the ambulance which RCEPI were instrumental in purchasing for them 5 years ago. 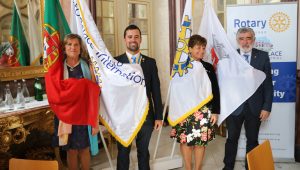 On arrival at Estoi Palace Pousada the Governor was able to view “Wheely” a van donated to the Algarve Oncology Association last year in a joint effort between RCEPI and Wolf Valley Charity. The Algarve Rotary Clubs will be funding equipment for the van which will be a mobile lung and skin testing unit. This will be operational by June.
40 members and guests joined DG Ilda Braz for lunch. The DGs husband José Braz presented a project to the Club regarding literacy in Moçambique and asked if guests would help to purchase educational material at a cost of 30 euros per set. Contributions enabled 6 sets to be bought.

RCEPI is celebrating its 10th anniversary this year and played a video outlining 10 of their main achievements during that time, including purchasing a refrigerated truck for Faro Food Bank, helping to purchase 2 mobile units the AOA for breast screening and lung/skin cancer testing, supplying 50000 litres of milk to Estoi Casa do Povo to supplement Faro Food Bank food packs to families in need, supplying equipment and helping purchase a van for the Estoi Casa do Povo, amongst many other community projects.

In her speech to the Club Ilda Braz outlined the special area of focus for Rotary in February which is Peace and the Prevention and Resolution of Conflicts. Rotary International has peace centres world wide and trains peace scholars. Rotary also contributes to peace when Clubs carry out project that address the roots of conflicts, such as poverty, economic inequality, ethnic tensions, lack of education and scarce resources.

The District Governor presented President Bruno with a small statue featuring a whale tailfin, to represent the Azores, and RCEPI presented the Governor with a cork handbag together with a donation of 300 euros Rotary causes.

Following lunch the DG Ilda Braz was taken to Olhao where she could see “Pinky” the mobile breast screening unit in action.

English
Get Involved
We use cookies to ensure that we give you the best experience on our website. If you continue to use this site we will assume that you are happy with it.Accept